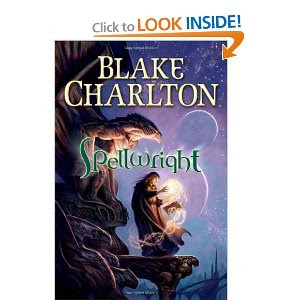 If you haven't met Nicodemus Weal, you should. He's the kind of character that will touch your heart and change your perspective.

A brilliant debut by a talented writer, Spellwright's story is all the more intriguing because it parallels the author's own struggles with dyslexia. The story of Nicodemus Weal, a dyslexic apprentice wizard who becomes hunted by several factions when it's thought he could be the long awaited Halcyon, who will bring unity and power to defeat the dark forces threatening their world. Others fear he could instead be the storm Petrel who will bring destruction. So Nicodemus finds himself on the run, wondering who he is and who to trust.

Spellwright takes place in a well crafted and interesting world where words are not just communication but a force to be reckoned with. They can be harvested as weapons or shields by those with the gift of magic who learn to control them. The journey of Nico and his mentor, Magister Shannon, grabs hold of you and never lets go, taking you on a fascinating and compelling ride.

The background of author Blake Charlton (http://www.blakecharlton.com/) is as unique and interesting as that of his main character. On his own website he writes:

As a child, severe dyslexia placed me in special education for most of elementary school. Only with the support of my saintly parents did I improve enough to be mainstreamed into a normal fourth-grade classroom. I was still pulled out for remediation in half of the classes. Each year, I just barely advanced to the next grade. At twelve years old, I still couldn’t read a book by myself.

But his parents were persistent and began reading fantasy to him: Robert Jordan, Terry Brooks, Tad Williams... As his interest grew, they began to read to Blake less and less, faking sore throats or other ailments, but always leaving the books behind. Blake writes:

I became obsessed with fantasy. I snuck Robert Jordan and Robin Hobb paperbacks into special ed study hall and read them under my desk when I was supposed to be completing spelling drills. My grades improved only marginally, but my height increased exponentially. The football coach at a local high-powered private academy noticed this and helped me get into his school. About that time I started reading science fiction (Frank Herbert, Orson Scott Card, etc.) and discovered more classical fantasy: Grandpa Tolkien, John Gardner, Ursula K. LeGuin, and Mary Stewart. Suddenly school wasn’t so bad: I discovered that Shakespeare and Spenser weren’t so different from Tolkien, chemistry not far off from alchemy, physics the closest thing to magic. Though I still loved football, I began to live to put my nose in books.

Since then, Blake's completed the preclinical years of medical school and taken the US Medical Licensing Examination. During that time, he twice rewrote Spellwright, while Stanford provided financial support in the form of a Medical Scholars Research Fellowship to write fiction.

But overcoming his own disability still wasn't enough. In addition to his desire to help people through medicine, Blake has been an English teacher, a learning disability tutor and a football coach. His passion for learning disabled kids is part of his inspiration for Nicodemus Weal and Spellwright's story of the power to overcome any struggle and succeed.

Blake is preparing his draft of the followup Spellbound to turn into the publisher shortly and it should be out by the end of year. Maybe he'll give me an early review copy, if not, I know I'll be waiting outside the story.

A great read, a unique world, a fun adventure. Spellwright is highly recommended.
Posted by Bryan Thomas at 6:42 AM