After almost a year, nine drafts, two independent editors, a series of beta readers, two critique groups, and a few rejections, I was tired of looking at the word file that was my novel's manuscript. I still believed in the story and characters and felt good about my writing though. Both the professional editors I'd worked with and the betas had raved at about, as had my crit group members. I'd polished and polished. But still had not achieved what I wanted -- holding the finished book in my hand.

Then I remembered the process I'd used to self-publish my short story collection using Create Space. If you format the cover and book interior yourself, there's no set up cost. And if you don't click "Submit For Publishing," Create Space never releases the book to Amazon or stores. This could be the perfect way to get to that next phase, I thought.

I went through the manuscript again and polished it some more, addressing a few issues I discovered with the main character's arc, polishing and tightening words and sentences and making sure it was ready. Then I sent it out to two betas for corrections and final notes.

After their notes came back, I implemented them into the manuscript, made a copy of the Word file and started reformatting the copy to meet Create Space's instructions for the interior of a 6x9 trade paperback. Locating a free temporary cover image off the web, I trimmed that down and used Photoshop to fit it into Create Space's cover template. Then I sent both files off to a friend who was experienced with Photoshop to double check and polish.

When they were ready, I sent them to Create Space for file approval.

Up to this point my total cost: zero. Much cheaper than print cartridges and paper reams would be.

A day or two later, after Create Space approved the files (which took a couple of tries with the cover because Create Space's instructions aren't any more understandable than anyone else's), I ordered a copy for proofing.

Looking it over, I made a few changes, resubmitted the files, and, a week later, had another proof. 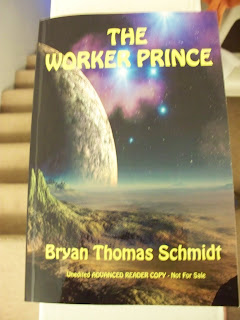 What a great feeling it was to finally hold the book I'd dreamed up 25 years before in my hand looking like a real book. Oh sure, I still had to find a publisher, but at least I knew it would look good that way, and reading the paperback was much easier than reading a backlit .doc file.

Since I never submitted for publishing, Create Space never released the book for sale so no one except me and Create Space even know it exists. I sent a few copies to faithful betas and a couple of reviewers and then submitted to small presses.

Now I am awaiting word from two who are interested in bidding for it. Altogether a very useful tool for getting professional looking book copies inexpensively. Total cost per ARC: $7.50 + shipping.