Immortal Blog Tour: Interview with Author Gene Doucette and an Excerpt From Immortal

My friend Gene Doucette has a new book out called Immortal. A combination of science fiction, fantasy, and horror, it's hard to categorize neatly by genre, but he's given me the opportunity to review the book and do an interview as well. As a bonus, you can find an excerpt below. I hope you'll check it out, and, if you like it, you can order the book here:
http://www.amazon.com/Immortal-ebook/dp/B004APA4ZW/ref=sr_1_1?ie=UTF8&m=AG56TWVU5XWC2&s=books&qid=1301763042&sr=1-1 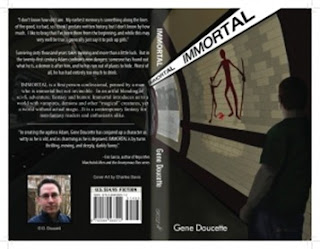